Much as we in Bagshot are endowed with belles, we are talking here about those great lumps of copper and zinc that hang in the highest point of our ancient village.

Bells have a mystical quality and have been associated with humans from very early times. They almost certainly have developed from an even earlier form of expression and communication i.e. drums and made a bit more interesting. The carrying quality of the sound of a bell is almost certainly the reason why we have come to know and love them. Think of it- dinner bells, gongs, clock bells, doorbells, ship's bells, wind chimes, crystal tableware, echo of bells. And they all arise from the action of something hard striking against something else which makes a sound which is appealing (no pun intended) to the human ear.

The earliest bells were simple plates of metal which made a ringing sound when struck with a 'hammer' of some description. With such a power of communication, they were adopted and developed by holy men of myriad beliefs. Over the ages, nowhere has the use of Bells surpassed that of the Church of England. Of the 5,500 worldwide installations of bells which can be rung by fully turning the bells rather than just swinging them, 5,000 are in England, 150 in Wales, 12 in Scotland, a few in Ireland and the rest are distributed through the English-speaking world (and America and Australia).

Bell Towers are classified by the number of bells they have and the weight of the heaviest (tenor) bell in the ring i.e. the 'peal' to you or me. They range from one bell of greatly varying weights up to 18 bells with a tenor of 72 hundredweight i.e. 3-1/2 tons. In Bagshot we are blessed with 8 bells with a tenor weight of 17 hundredweight i.e the weight of a family car. The total weight of 8 bells swinging above our heads is 63 Cwt or 3 tons. This was the typical weight of bells in 1884 when St Anne's bells were dedicated. This is a very heavy set of bells for the size of the tower.

Church Bells are usually dedicated to local dignitaries or in memory of a much-loved family member or benefactor. In our case, they are dedicated to members of the Waterer family who more or less provided Bagshot with employment and income for many, many years.

The Bells at Bagshot are a 17cwt ring of 8 hung in a cast iron frame on two levels installed in 1884 when the church was built. Originally there were 6 bells cast by Warner’s with a 21 cwt tenor. The bells were dedicated to and paid for by the wife of Michael Waterer whose rhododendron nursery employed a large proportion of Bagshot’s working population at the time.

In 1912 the ring was augmented to 8 by addition of two new lighter bells.. The work was carried out by Gillett and Johnson who cast the new bells and built the new frame and fittings. The canons and cast-in staples were removed from the Warner bells and they were re-tuned employing the then relatively new principles of harmonic tuning. This process reduced the weight of the bells with more than 3 cwt of bell metal removed from the tenor alone. A compact bell frame was required to squeeze the 8 bells into the narrow tower. This is evident by the use of undersize wheels, novel G&J space-saving slider/trollies and the deep groove cut into the brickwork to provide clearance for the number 4 bell wheel. This close spacing has made slider lubrication, cleaning and frame painting etc accessible only to contortionists.

Ball bearings were fitted to the bells in 1947. According to a Whitechapel inspection these bearings are relatively small which contributes to the bells being relatively heavy to ring. The stays are straight, which makes replacement easy and the sliders are steel runners which require annual cleaning and lubrication to keep the running freely

The small ringing room, accessed by a clockwise spiral staircase, has 7 of the 8 ropes very close to the walls in a ‘square circle’ which leaves very little room for sitting out and for some of the interesting artefacts displayed in other towers. The short drop of the ropes is very forgiving and has allowed some ringers to develop a style called the ‘Bagshot Wave’ which needs to be seen to be understood.

Contrary to the practice in Europe and much of the rest of the world, bells in England are rung by people pulling on ropes to various patterns rather than rung by mechanisms. In St Anne's we have a group of about 12 people who ring for regular Sunday services, weddings and the occasional funeral. The 'band' is mostly made up as it always has been of local Bagshot people i.e tradesmen, local business people and the Bagshot Scouts who featured heavily (and noisily). Ages range from 11 to 65 with one ringer approaching his 50th year of dedicated service. For all of us there is a lift in the first rippling peal on a Sunday morning at 9.30 or maybe just the devilment of waking people up. Up till 50 years ago, the first ring was at 7.30 AM and 6.30 AM on Christmas Day! 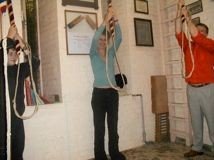 Ringing for weddings is always therapeutic with the hope that we are sending the happy couple off with the sound of joy ringing in their ears into a happy life together.

Practice nights on a Thursday are also uplifting and good fun, providing exercise, mental stimulation, socialising and it is absolutely free. The following visit to 'The Foresters' is not compulsory. All are welcome and it is never too late to learn as your writer can readily testify!

Please contact any member of the Bellringers for further information. There is lots to find out, not to mention the clock and its bell! If you want to have a try at bell ringing, come on Thursday practice night 7:30-9:00 pm 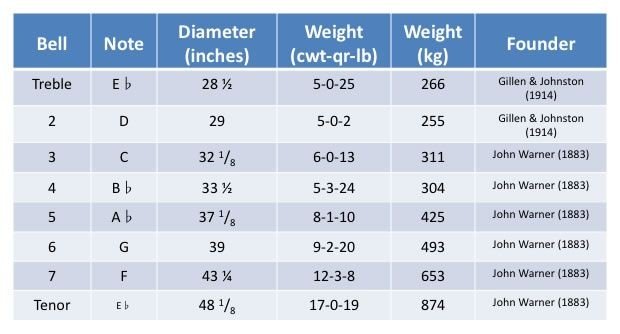